Welcome back to Bolivia, Gringo

In the early morning of Friday, October 2nd Jay and I landed in La Paz, Bolivia after a long 18 hours of traveling.  We marveled at the majestic mountains bordering the bowl that is La Paz as we descended into the highest international airport in the world.  Touching down, pangs of excitement replaced the groginess from my mind and we proceeded to immigration ready to get stamped in and get on our way.  Having experienced one border crossing into Bolivia already, we were prepared to pay the $55 fee in exchange for a 30 day visa. So when the official on the other side of the glass requested $160 per person, we were thrown for a loop. After explaining that we previously had been charged much less, he let us know that we were let into the country during some sort of provisional, trial period and that now, Americans must pay the full fee.  He made it clear that they are only matching the price charged to Bolivians when they enter the U.S.  Fair enough, we forked over the cash.

Next stop, customs to extend our motorcycle permits which were set to expire in 2 days. Luckily, Angela the customs agent was incredibly helpful and processed all our paperwork in relatively short order.  Because we didn't have our motorcycles with us, we were directed to return on Monday with the bikes for a final verification at which time we would be granted the permits, sin problemas!  We hopped in a cab, checked into our airbnb room, and spent the weekend getting the bikes dusted off and ready to roll.

Monday morning we hit the road early in an attempt to avoid the traffic downtown.  We quickly learned, however that there is absolutely no avoiding traffic in the city of La Paz.  Fighting our way through the honking, smoke spitting, lawless cluster, the road finally opened up and we began ascending the Autopista El Alto.  Right as we got up to highway speed, Jay's bike cut out.  Completely died.  Non-responsive.  We drifted over to the side of the road in an attempt to create some sembalance of safety between us and the fast moving traffic.  Thirty anxiety provoking and explative filled minutes later, Jay still could not pinpoint the problem.  If we didn't make it to the airport with our bikes that morning we would be operating without a permit and at risk of having our motorcycles confiscated by the government.  We had to find a way to get there.

Smelling opportunity, a taxi driver in a red Nisaan Vibe pulled over to offer a ride.  Assessing the situation, and without a second thought, he pulled a small, fraying rope out of the back of his car and offered a tow.  With no other options in front of us, we wound the rope around Jay's front forks as Gonzalo secured the other end to his hitch.  "No sea nerviosa", he assured me before jumping into the car and jerking Jay forward.  I knew that Jay was a very skilled motorcycle rider, but successfully navigating this situation put him on a whole new level in my eyes.

Arriving at the airport with both bikes, we let out a sigh of relief.  At least we could legalize our bikes and have a safe space in which to diagnose and repair the issue.  Turns out our sigh was a bit premature...

Sandra, the lady at the customs window immediately knew the reason for our visit, and pulled out a stack of our documents.  She fixed her gaze on me first, sliding my new permit through the window and pointing out the relevant dates and info.  She showed me where to sign and with a smile told me, "Estas terminado", you're done!  With no change in her demeanor she moved onto Jay's paperwork.  I began packing up my bag assuming his process would be similarly as expedient.  Sandra flipped to Jay's permit and rather nonchalantly told him that they could not issue him an extension.  She pointed to a small highlighted section that indicated his previous permit had been cancelled on April 11th at the same border through which we entered the country on April 7th.  According to this, Jay's bike left Bolivia only 4 days after we arrived.

We must be misunderstanding, we thought; just another case of lost in translation. We politely explained to Sandra that this was impossible.  We had the stamps in our passport to prove that our comings and goings did not line up with this accusation.  Sandra, however, was not interested in proof.  She simply kept repeating that there was nothing she could do.  Her proposed solution was for Jay to immediately ride to the border, leave the country, and then re-enter to obtain a new permit.  This supposed best option was full of holes, including the fact that Jay's bike was not currently functioning.

At this point, we were both boiling inside, but trying to keep our cool in the hopes that our calm and rational arguments would miraculously change Sandra's mind and fix this mess.  About a half hour into our circular discussion, a tall, kind looking gentleman approached and, in English asked how he could help.  After patiently listening to our story Emilio conversed with Sandra for a moment before confirming that they can not, in fact, do anything.  He did, however offer a solution that struck us as much more legitimate than making a break for the border.  He sent us downtown, back through the nightmare of traffic, to Unidad de Transparencia y Lucha Contra la Currupcion - Unit for Transparency and the Fight Against Corruption.  Now this was getting serious.


Forty five white-knuckled driving minutes later we found the office...right as they were closing for their 2 hour lunch.  We popped into a small restaurant next door and waited, taking a minute to reflect on the ridiculousness of the situation.  At 2:30 we checked in with security and found ourselves being escorted into an official looking conference room.  A young man in a dark blue aduana vest entered, sat down with pen hovering over notepad, looked us square in the eyes and asked how he could help. Jay (who at this point was a pro at explaining this story in Spanish) walked him through the whole deal.

"Esperame un momentito, por favor." So we waited as Iver stepped out of the room.  Several minutes later he returned to explain that everything would be okay.  He admitted that this was obviously an error in their system and they would go about fixing it right away.  Great!  Our excitement at the good news was short lived as Iver went on to tell us the complicated process necessary to correct an error of this sort. They had to identify who erroneously cancelled the permit, this person then must admit their mistake and fill out a report explaining what happened, the report is sent to the aduana office at the airport and reviewed by our buddy Emilio as well as his boss, the boss then writes up another report to send to Iver, who then sends it up to his boss for approval.  Then and only then can Jay get an extension on his permit.

Our heads spinning, we shook Iver's hand and made our way outside.  Tired, frustrated, and feeling helpless we just wanted to plop down in bed and drift away into a deep sleep, forgetting all our worries.  Instead, we had to deal with the fact that Jay's bike was broken down at the airport, 45 minutes away.  Luckily, over the weekend we had made friends with the family who runs Palacios Xtreme- a motorcycle shop in town.  A quick call to them resulted in Carlos and Jorge meeting us at the airport.  Within 1/2 hour they diagnosed and fixed the culprit: a loose wire under the gas tank.  At least we were able to solve one of the major problems of the day.

So then we waited.  We diligently checked in every day with Emilio who each time prompted us to call back the next day at 4.  On Friday, one week later, we finally got the news that Jay's permit was ready to be picked up. We made our way up to the airport yet again and, hesitant to feel any sense of relief until we had the permit in our hands, we entered the aduana office with shoulders tensed.  We spotted our friend Emilio who told us that Miguel had all our paperwork and could we just take a seat for a moment?  We sat down and waited, something at which we had become experts. Fifteen minutes later, Jay was called up to the window and presented his real, live, legal motorcycle permit- valid for 120 days. 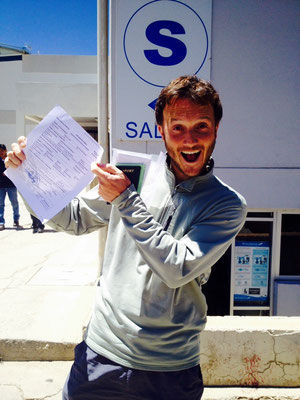 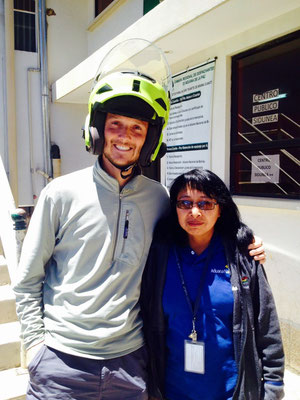 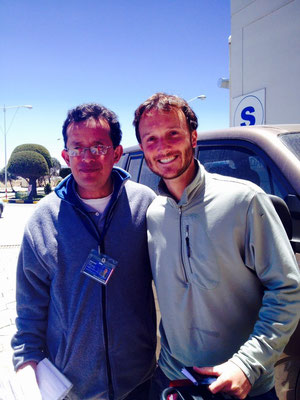 Jay got the permit!; Angela, our first friend at aduana; Emilio, our English speaking savior
Descending back into the valley I felt lighter, more able to take in the beauty of the place that had held us hostage.  Time to kick this trip into gear: Ushuaia here we come!